The "Śląsk" Song and Dance Ensemble in the name of Stanisław Hadyna is one of the best recognized artistic brands from Poland. "Śląsk" (in English Silesia) has been performing since 1953, and although it is has been in existence for so long, it does not lose its spontaneity, still surprising new generations with its beauty and originality. Everyone who hears the first words of songs such as "Helokanie" or "Ondraszek", anyone who has ever seen highlander dances performed by the artists of "Slask", at these sounds and sights one immediately recalls the green Beskidy hills and sharp Tatra crags, and as their background one sees the hues characterizing the ensemble from Koszecina.

Such is "Slask’s" power to charm with its music, dance and singing, which has been moving the hearts of the audience for over half a century.

For 66 years, "Silesia" has been the Ambassador of Polish Culture in the world, an advocate of the national cultural heritage, treating its Silesian roots with particular attention. Songs that are today the hallmark of the group: "Karolinka", "Starzyk", "Gąska" - are inseparably associated with every Pole with Silesia. Although Silesian songs and dances became the basis of the ensemble's repertoire, its artistic offering is much broader. "Slask" has a dozen or so various programs presenting not only the rich folklore of the land from which the band took its name, but also the folklore of most regions of Poland. There are also national dances, choral and oratorio pieces by Polish and world composers. Sacred music is also a very important item in the repertoire of Slask - from Marian song carols and patriotic songs to oratorios for funeral masses.

"Slask" is currently a cultural institution with enormous performance capabilities, performing about 150 concerts a year. "Slask" is a total of nearly 300 people, of which over 100 belong to the artistic group formed by the choir, ballet, and orchestra. The ensemble is a great Polish ambassador; in its history it performed 8,000 concerts for nearly 26 million viewers in 44 countries on five continents. They are greeted everywhere with standing ovations! To meet the expectations of the audience and the needs of the modern music market, "Slask" records its work also on CDs and DVDs. Its achievements include among other things a phonographic series of 16 discs, among which there were 5 gold and 1 platinum, and several received nominations for the "Fryderyk" – an award of the Phonographic Academy. Particularly noteworthy are the two recently published phonographic items: "Litany of Ostrobrama" on the 200th anniversary of the birth of the great Polish composer Stanisław Moniuszko and "Song of the Fatherland" published on the occasion of the 100th anniversary of Poland regaining independence.

In recent years, DVDs have also appeared, including with the recording of the flagship folk and national concert 'And this is Poland', as well as documentary films devoted to the band's creators - Stanisław Hadyna and Elvira Kamińska.

"Slask" as a dynamically developing cultural institution positively affects the image of Poland not only through concerts. The team undertakes further challenges that broaden its primary activity. The thriving Silesian Center for Regional Education promotes cultural education among children, youth and teachers. The Center's pioneering achievements show the huge demand for contact with living culture. Vocal and dance workshops are held at the ensemble's headquarters with the best teachers

in the field of dance and singing that educate young students of the arts. The ensemble's headquarters have been open for many years. Here, everyone who wants to experience regional culture and wants to find favorable conditions for creative work, tourism and rest during open-air events and concerts organized by Slask will find hospitality. The charming headquarters of the “Slask” not only allows for adequate comfort for the work of artists and educators, it is also one of the pearls of Silesian architecture, the physical heritage of Poland. In 2014, after many years of comprehensive renovation works, the Palace and Park Complex in Koszecin regained its former splendor thanks to a subsidy from the European Union.

Today, the headquarters of "Śląsk" impresses with its architectural beauty and functionality, attracting thousands of visitors to Koszecin.

The audience is more and more eager to visit Koszecin making use of professional artistic workshops, visiting the beautiful headquarters of the ensemble and learning the secrets of behind-the-scenes life of "Slask". Not everyone knows that an artist changes clothes about 12 times during a concert and has only a few minutes to do so. The costumes for the concerts are transported in special cabinets, in which each artist has a set of tailor-made costumes and a box with cosmetics for make-up. For a full concert (choir, ballet, orchestra) the ensemble uses nearly 7 tons of costumes! There are 21 thousand sets of costumes in team warehouses - about 24 tons, most of which are over a dozen or even several dozen years old!

“Slask”, taking care to create the perfect stage effect, the ensemble prepares for concerts preparing its costumes and arranging their own transport. There is a tailor's workshop in Koszęcin's headquarters, in which the clothes are sewn and repaired. There is also a "Silesian" shoemaker and a laundry facility, where after the concerts over a hundred pieces of costumes go: blouses, shirts, petticoats, etc. A technical team travels to every concert, bringing with them everything necessary to prepare the acoustics, lighting and stage for the concert. The ensemble spends most of the year away from their headquarters, so the "Slask" fleet is complemented by four coaches with which artists travel all over Europe.

From the beginning of its existence, "Slask" regularly travels around the world, also visiting America. For the first time, the audience overseas saw Polish dances and songs performed by artists from Koszecin in 1959.

In its history, "Slask" gave concerts in the United States in 1974, 1978, 1985, 1989, 1998, 2004, 2005, 2008, 2012, 2013, and 2015. Even up to today, the performance art of the ensemble from “across the pond” could be admired many times. Meetings with the Polish diaspora are invariably full of emotions and emotions, especially if - as this year - they take place during the upcoming Christmas. This is not the first time the ensemble has been ushering the Polish audience overseas into a festive mood. In December 2008, "Slask" performed for the Polish community during a two-week tour in the states of Michigan, Illinois, and Texas. Concerts of the most beautiful carols and pastorals were held, among others in Chicago, Burbank, Houston, San Antonio, as well as in the cities of Panna Maria and St. Hedwig.

Christmas Eve the ensemble spent under the Texas palm trees, where they met the descendants of Silesian immigrants of 150 years ago.

Deeply embedded inmemory was the tour in 2012, when the band had to deal with hurricane Sandy, however, realizing the schedule in full, in spite of the forces of nature, and to the great joy of their awaiting countrymen.

This year's American tour, a Christmas concert of carols, pastorals and patriotic songs in connection with the 100th anniversary of Poland regaining independence, will include in Hartford, Webster, Syracuse, Ottawa, Toronto, Mississauga, Hamilton, Milwaukee, and Chicago, and the whole tour will start with performances in New York.

"Slask" is a delightful artistic phenomenon, and above all freshness, spontaneity, joy of life, grace, elegance - qualities developed by the first team members and passed on to subsequent generations of artists. It is thanks to this that the shows of "Slask" are still so modern, and each of the dozen or so program proposals of the ensemble is an artistic event that touches and stays in your memory for a long time.

The Song and Dance Ensemble "Śląsk" in the name of Stanisław Hadyna is led by director Zbigniew Cierniak - a singer, artist, and manager associated with the group for over 27 years, who is honored with many prestigious awards and distinctions. 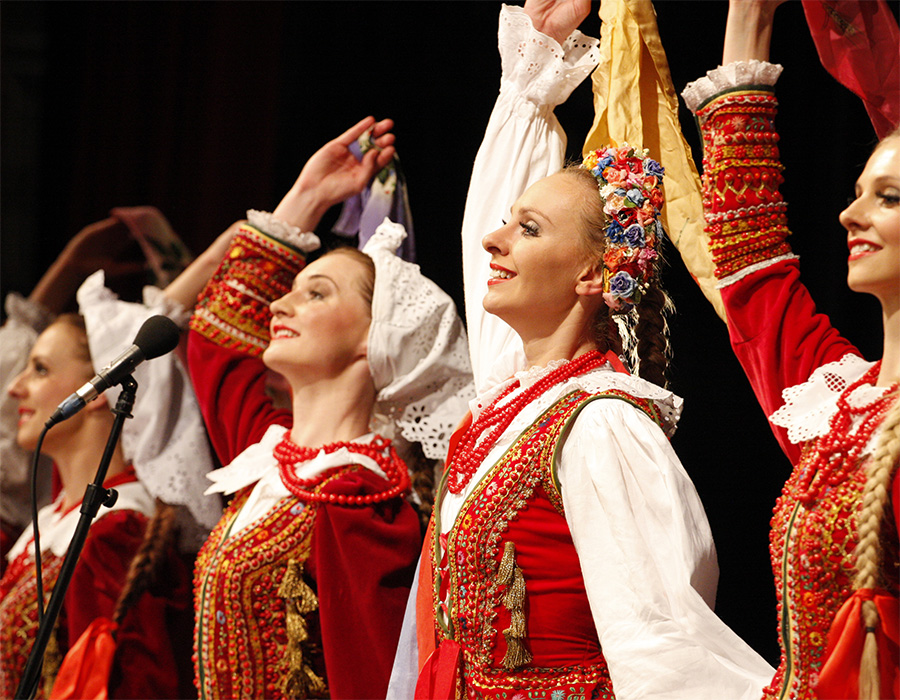 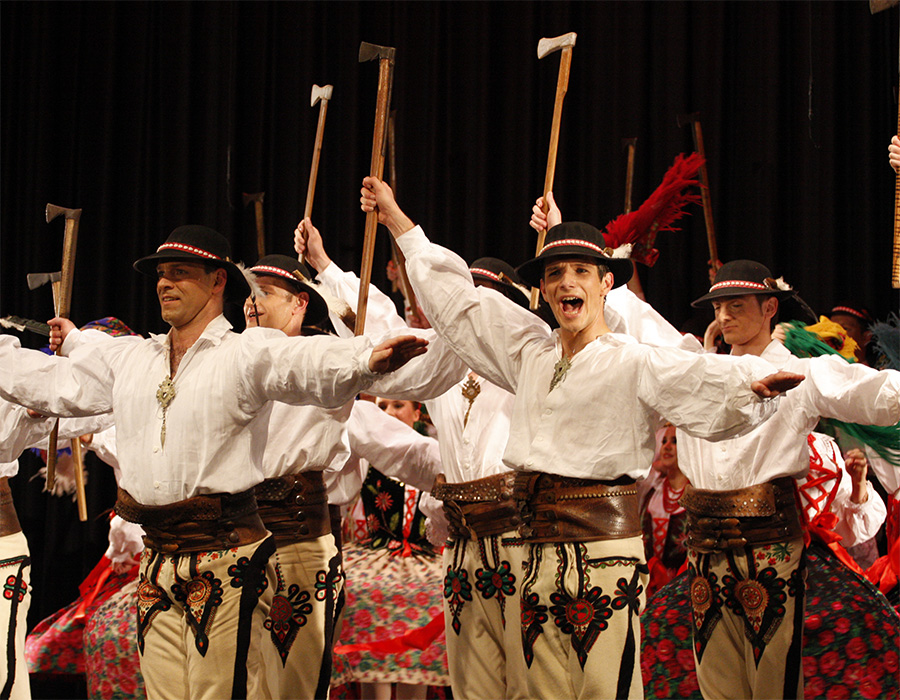 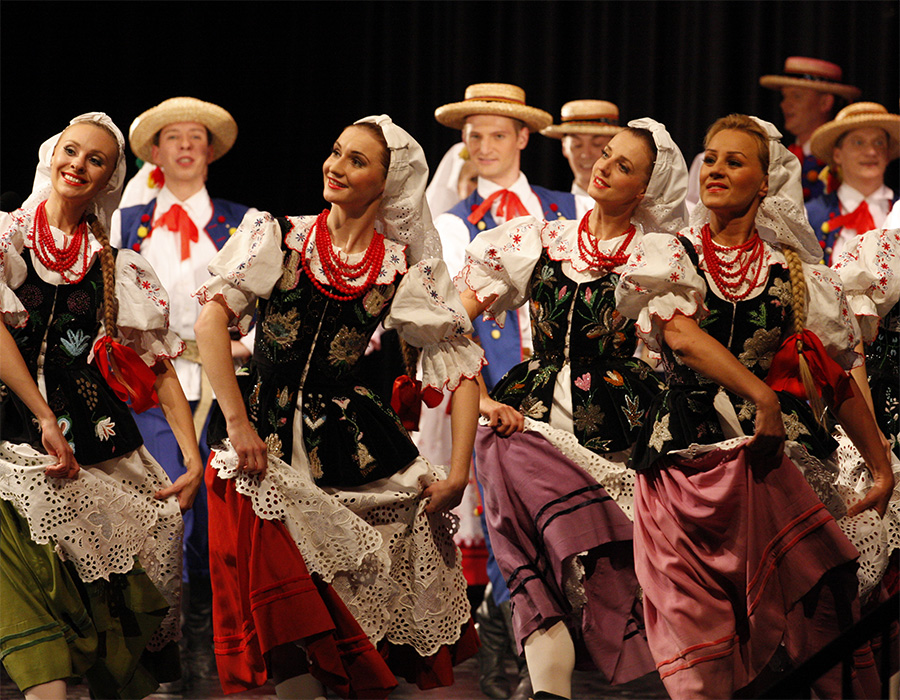 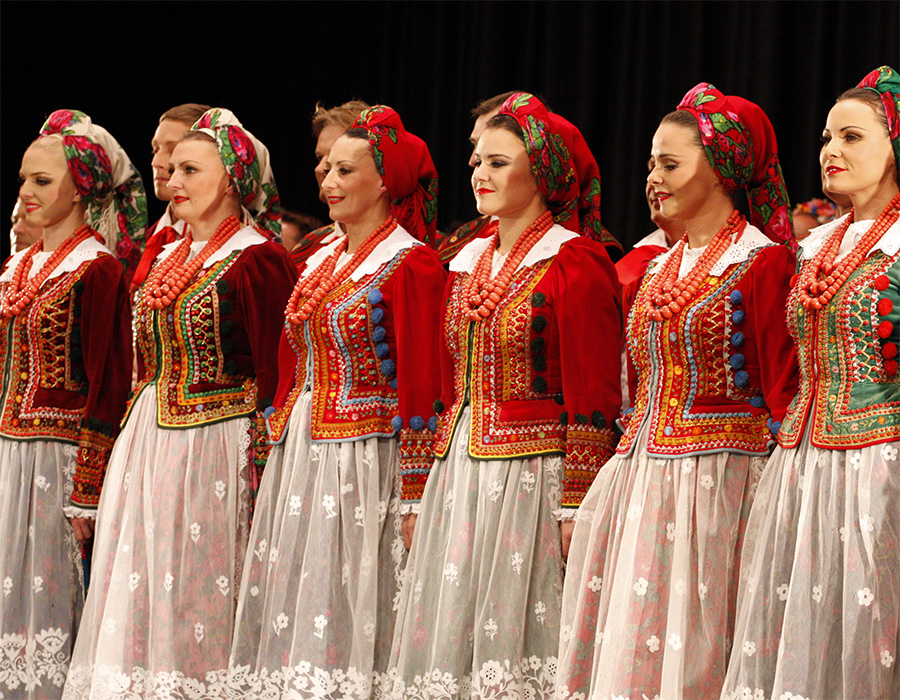 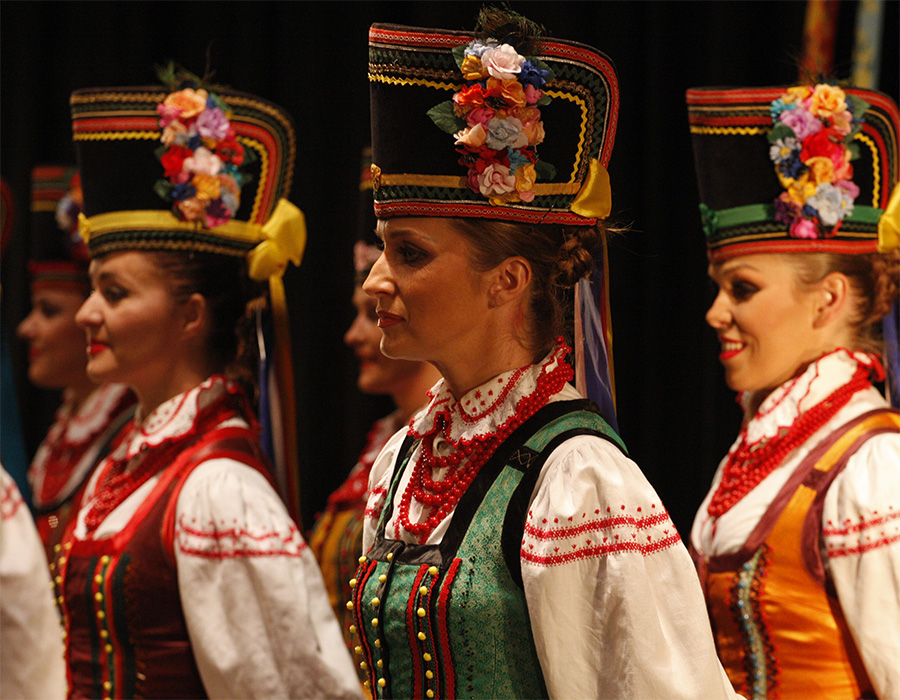 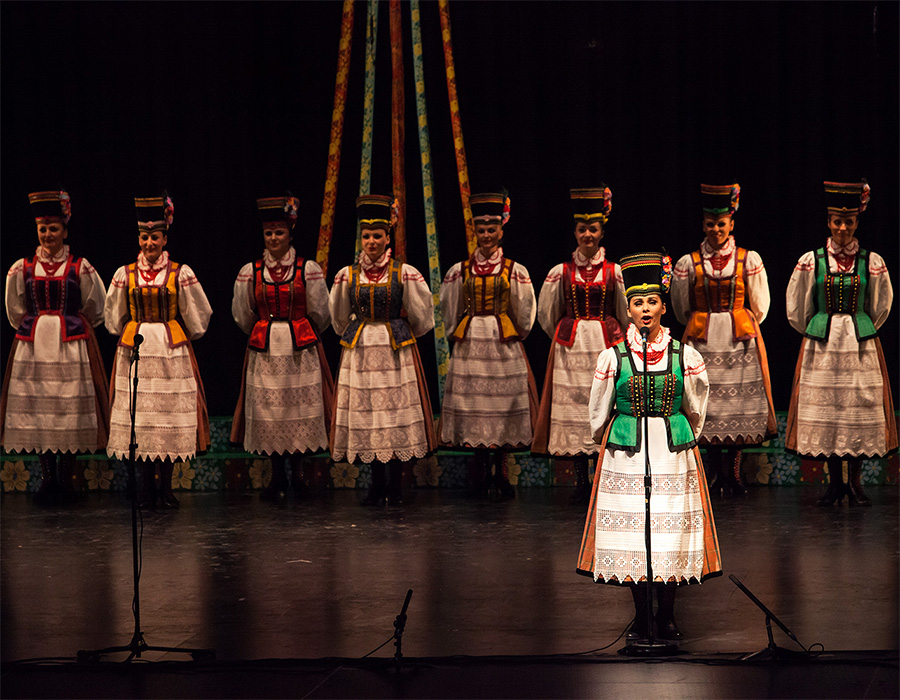 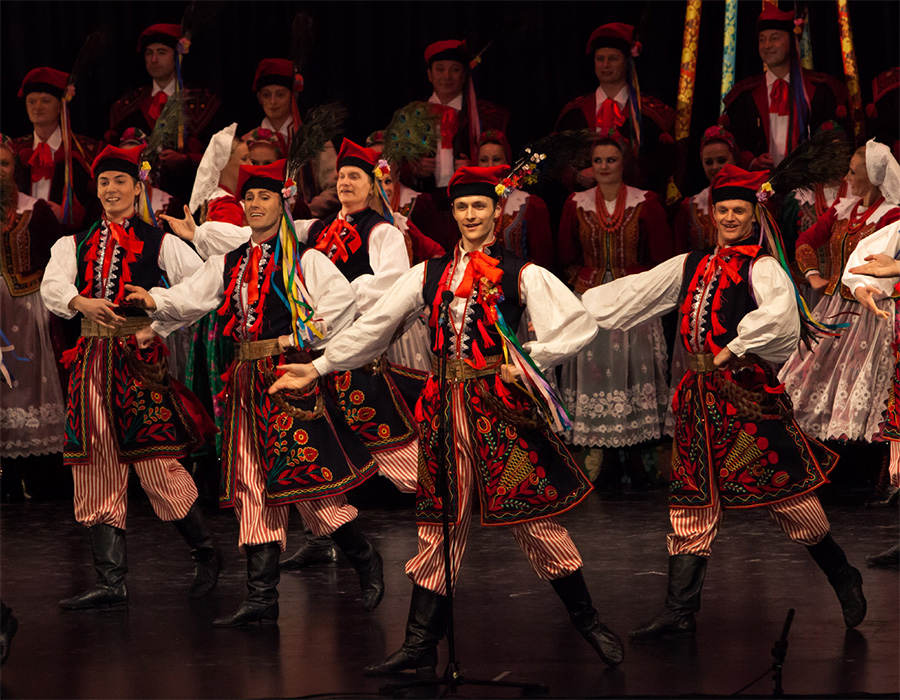 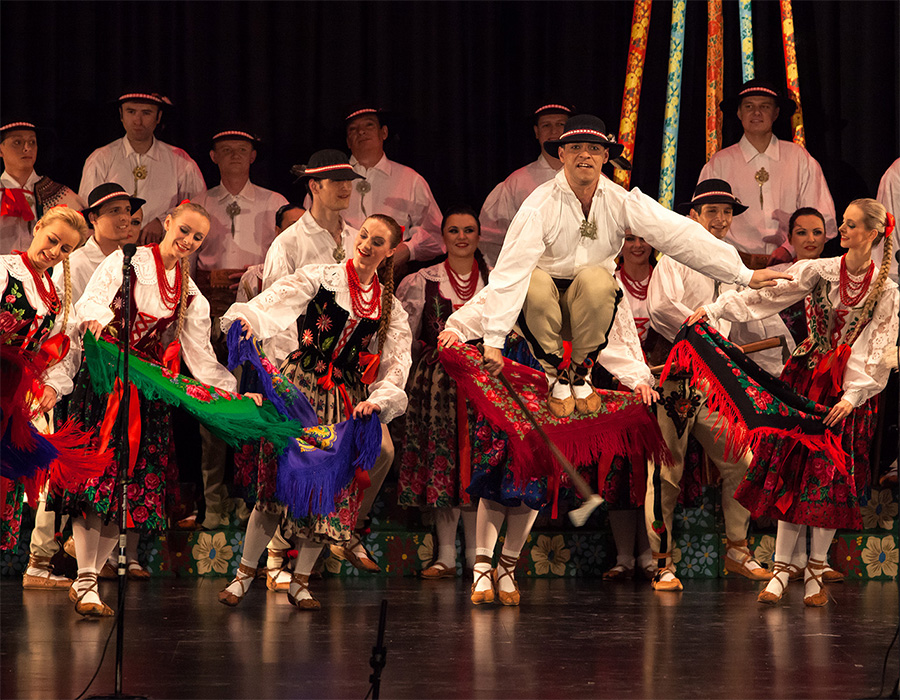